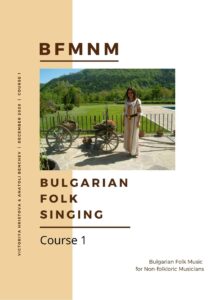 This music workbook is designed to go along with Vocal course 1, which is part of the section BgEthnoLab of the platform Bulgarian Folk Music for Non-folkloric Musicians. Here you will find warm-up and technical exercises but the ten popular Bulgarian folk songs are the essential part of the training material.

Part I presents the warm-up exercises, which contains some typical ornaments of this traditional folk style. Furthermore, they are intended not only for preparing the student for the upcoming vocal practicing but for reaching a better “setting up” in the specific Bulgarian sounding.

Part II contains 25 technical exercises, which are extremely useful for the initial mastery of some of the most typical and often used ornaments in Bulgarian folk music. We are focusing mostly on: crushed note, mordent (in both of the variations – upper and lower), turn and trill. Passing through this material guaranties an easy assimilating of the next main part of the educating process.

The songs are carefully chosen from the repertoire of different performers and authors in a way to present the unique styles of few different regions of the country. Some of them has easy flowing slow melodies. Others are fast and temperament with specific accents and precise articulation. Nine of them are one-voice songs and one is for two voices (“Momche dava zlato za devoykya”). Nine of them are in a certain metric pulsation and one is unmeasured (“Lale li si, zyumbyul li si”). After you master the compositions in Part III of Bulgarian folk singing you may add them to your personal repertoire list and try to perform them as you create an arrangements with other musicians.